With So Much Rails to Learn, Where Do You Start?

Have you seen the Rails Competency Chart?

Brook Riggio of CodeFellows put it together to show all of the concepts a modern Rails developer should know. Take a look: 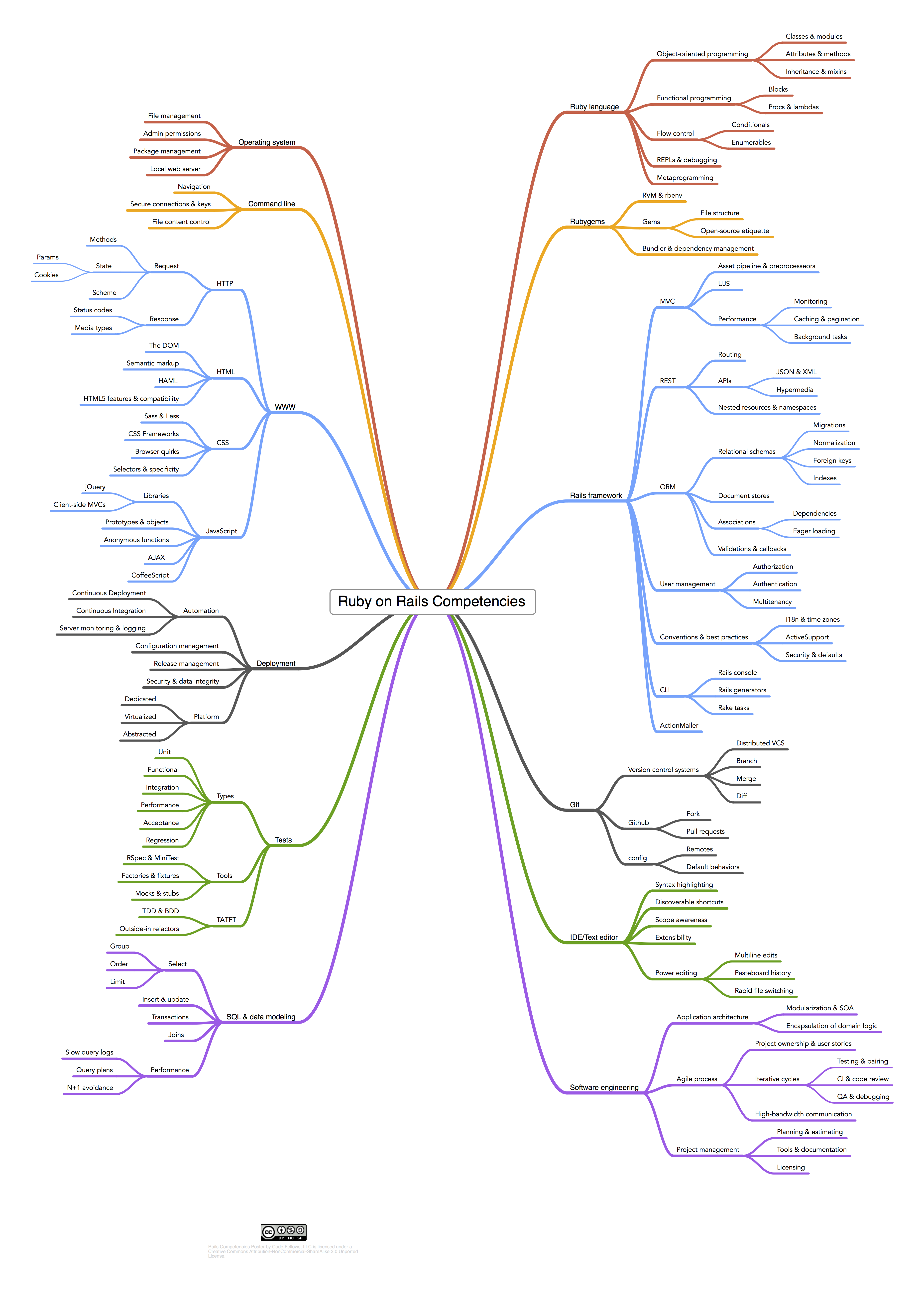 Frightening, isn’t it? It looks like a two-hundred-tentacled monster that’s preparing to attack you.

It’s no wonder learning Rails is intimidating. Some of the branches, like SQL and Deployment, could be entire career paths. You could spend years on Application Architecture and still not feel like an expert.

But it’s accurate. If you show this chart to a professional Rails dev, you’ll probably hear, “Yep, that sounds about right.” If anything, you’ll hear about what it’s missing.

So how can you deal with all this? How do you learn all this stuff without having started 5 years ago?

How do you handle all these topics?

Yeah, most professional Rails developers know a lot about a lot of those concepts. But you don’t have to know all these things to start building your Rails apps. You don’t need to study deployment until you’re ready to deploy, and you can look up how to group things in SQL the first time you have to do it.

One thing this chart doesn’t illustrate well (even though the blog post talks about it) is how the different areas reinforce each other. For instance, unit tests, integration tests, acceptance tests, and all the rest use similar skills and knowledge. Yes, there are some differences between the different types of tests. But once you start to understand the fundamentals of testing by writing a bunch of unit tests, you’ll pick up the other types much more quickly.

Where do you start?

If you try to pick up every one of these skills at the same time, you won’t take advantage of the extra speed you’ll get as you master them one-by-one. So focus on a few at a time, and learn them well.

Ask yourself this question:

“What do I need to know to make progress on the problem I’m facing?”

Use your answer to narrow in on which competencies to start with. As you pick those up, you can check out the skills right around it, and take advantage of what you just learned to learn similar things faster. For instance, if you’re feeling comfortable with the command line, you could pretty easily branch out into things like package management and permissions.

By building these skills as you need them, you’ll have a little extra kick of motivation. You’ll be spending time on the stuff that matters to you.

For instance, if I was learning multitenancy because I felt like it’s something I should just know, I’d be asleep halfway through the first blog post. If I was learning it because it was the only way I could get my app to work, I’d be glued to every tutorial and reference guide I could find.

It’s crushing to see a few hundred skills, and know you need to learn them all. Especially when those first few competencies take you weeks or months to pick up. You’ll feel like you’ll never become a professional Rails dev.

The chart’s not wrong. As a Rails dev, you’ll eventually know a lot about most of those things. But we didn’t all start there.

So, start somewhere. Prioritize, and move along the path that leads to your app being built. Branch out to fill in the gaps. And recognize that you’ll get faster as time goes on.

And if you want to learn those skills faster, and remember how to use them when it counts, grab this free sample chapter of Practicing Rails. You’ll learn the method I use to learn new Rails ideas quickly and thoroughly, without getting overwhelmed.